Ventilation Shut Down is the practice of mass killing animals by turning off the ventilation systems on a farm. This is a method of ‘euthanasia’ that is permitted in constrained circumstances by the AVMA (page 45).

" Ventilation shutdown involves closing up the house, shutting inlets, and turning off the fans. Body heat from the herd raises the temperature in the house until animals die from hyperthermia. " In addition, farms often introduce heat through the ventilation system. The entire process of hyperthermia is cruel in itself, but often animals die slowly due to other causes such as suffocation from high levels of carbon dioxide and other toxic gases.

This method has been used in response to infectious diseases ravaging through pig farms, but most recently it has been used in response to the COVID-19 pandemic. The meat industry has been facing supply chain disruptions due to the surge of COVID-19 infections in slaughterhouses. Many slaughterhouses had to shut down, meaning many CAFOs had no place to send their “market weight” pigs. As of early May 2020, the National Pork Producers Council (NPPC) confirmed that the supply chain disruption will cause farms to ‘euthanize’ 700,000 pigs per week.

The industry describes the pig industry’s process as ‘just on time.’ As you can see from the graphic below, pigs are moved to different barns at different stages of their lives. The supply chain disruption has meant that the pigs that are meant to move into finishing barns have nowhere to go.

The industry’s response to this issue, rather than stopping the artificial insemination and breeding of these pigs, was to abort the fetuses of the currently pregnant sows, kill any piglets who weren’t in perfect condition, and kill the pigs who were ready for slaughter.
In May of 2020, Direct Action Everywhere (DxE) investigators including Matt Johnson released footage of VSD+ in action in collaboration with Glenn Greenwald at The Intercept. In the video, you can hear horrifying screams from the pigs dying from hyperthermia at an Iowa Select Farms location. 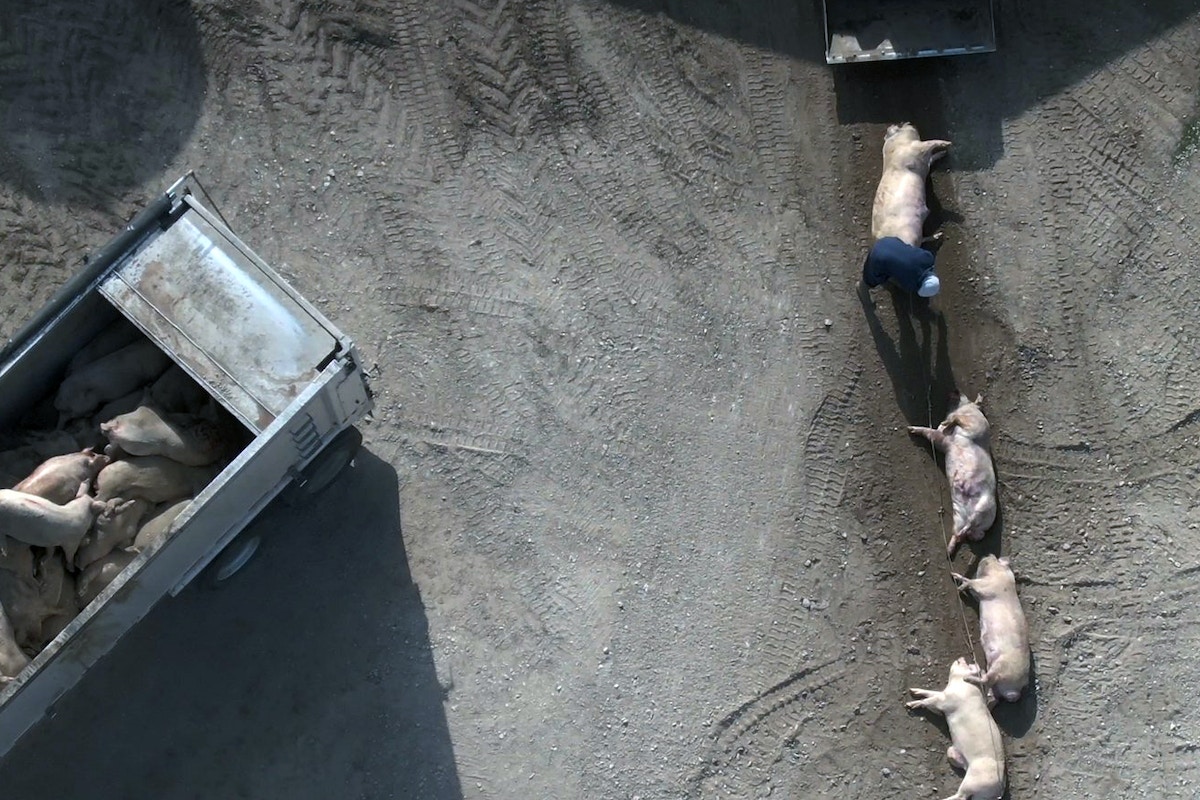 Pigs are being slowly suffocated and roasted to death by an agricultural industry that relies on secrecy. 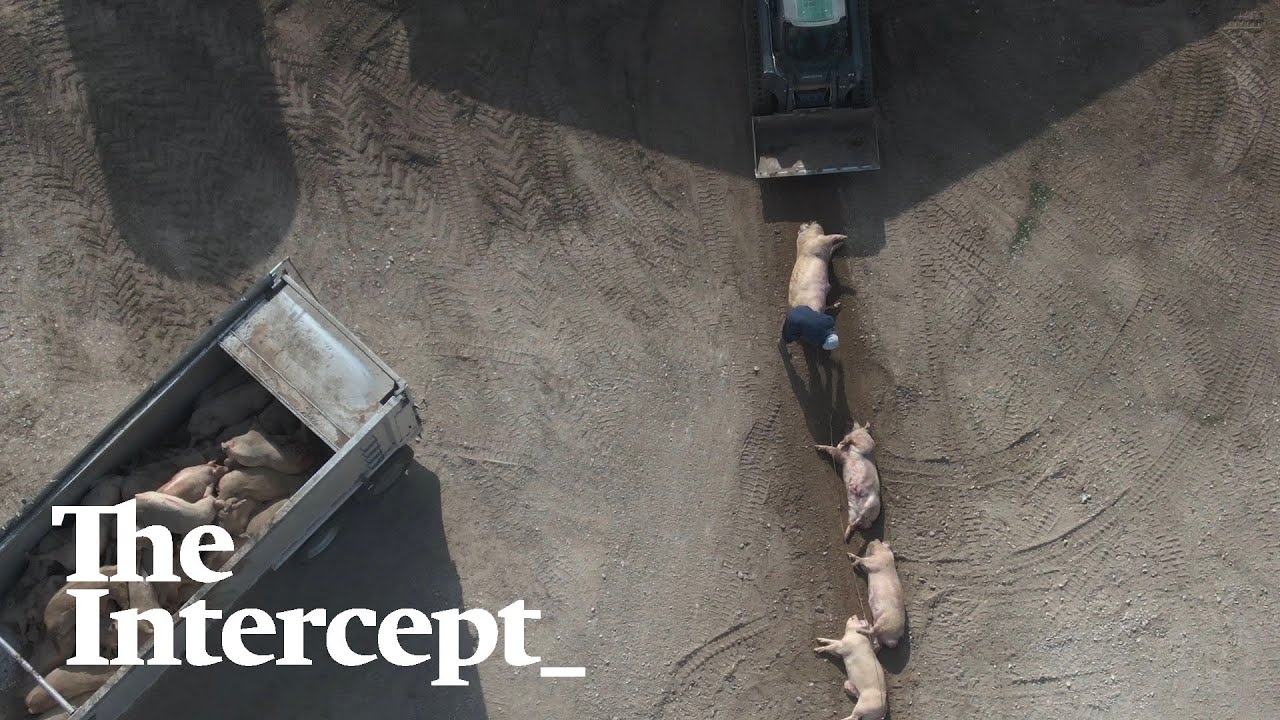 A day and a half after this VSD footage was released by the Intercept, Matt Johnson was arrested in Iowa on multiple charges. 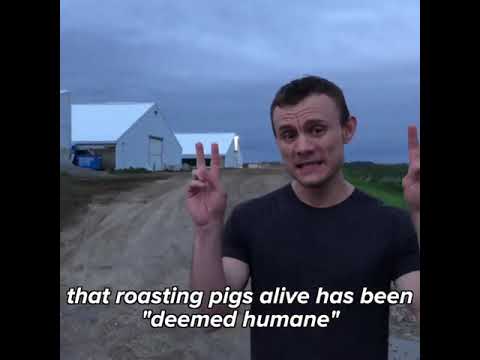 The AVMA states that VSD should only be used when other methods have been ruled out. Iowa Select Farms prosecutes anyone who attempts to obtain information on their methods and animal welfare, and it is doubtful they have ruled other methods out. AVMA claims VSD will cause a quick death and this is “humane” because it prevents “the chance for animals to die over a longer period of time from distressing and devastating disease.” The pigs at Iowa Select Farms are not suffering from a contagious disease, they are simply not profitable due to supply chain issues. An anonymous whistleblower from Iowa Select Farms stated that the death of the pigs due to VSD was anything but a quick death, and pigs lay dying slowly over the course of a night. Many pigs were still alive the next morning after Ventilation Shutdown, at which point, the farm instructed workers to find the remaining live pigs and kill them using the bolt gun method.

However, VSD is considered an inhumane practice by many. Representative Lloyd Doggett (D-TX), chair of the House Ways and Means Health Subcommittee, is against the use of VSD and has submitted a letter to the USDA. He has garnered support from over 20 Democrat lawmakers as they voice their concerns regarding cruel methods for ‘euthanizing’ pigs and chickens. They call the process “inhumane, distressing, and painful.” The letter states: “…I am also alarmed by the use of heat exposure, mass suffocation, and drowning, which cause animals unnecessary suffering…the USDA should act promptly to prevent the use of these most inhumane methods. When executed with heat, ventilation shutdown for poultry and pigs causes animals to die by hyperthermia. "

Furthermore, the NPPC is requesting federal assistance for “euthanizing” and reimbursement for the disposed pigs. This is in addition to the fact that pig farmers have already received $1.6 billion in direct payments. 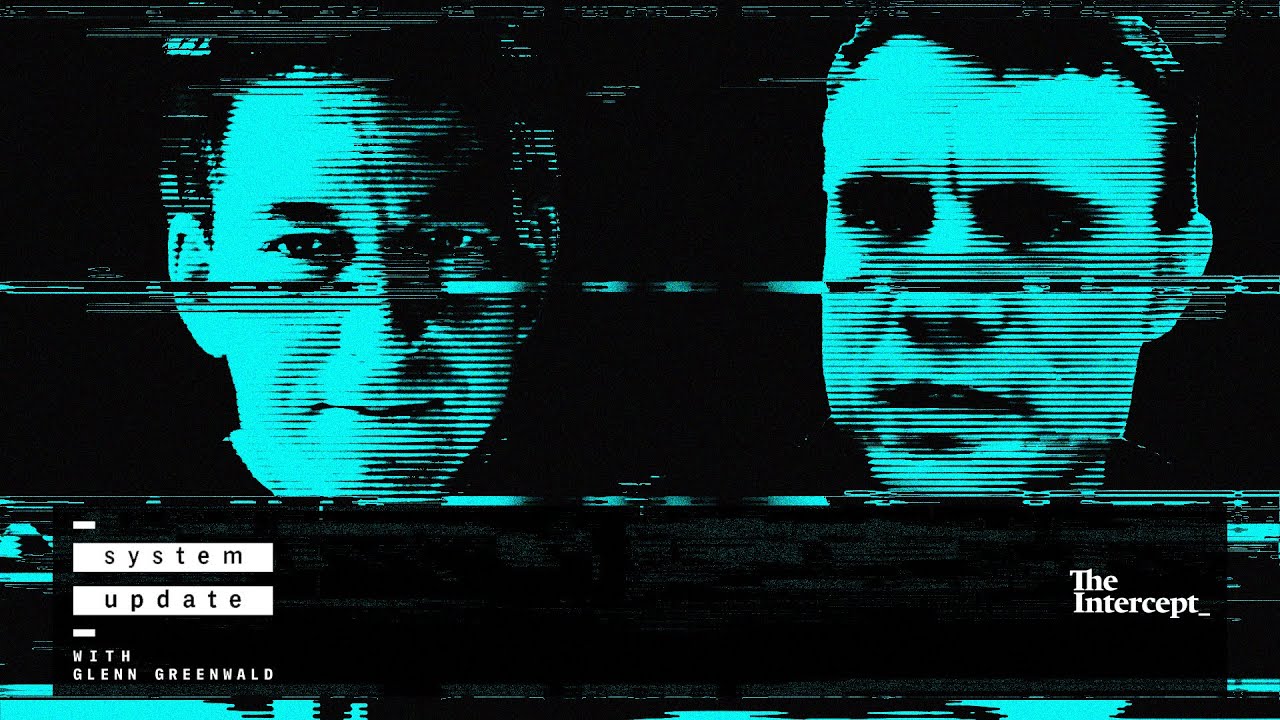 This is horrifying! It’s unbelievable that the meat industry is getting away with this. They are roasting pigs alive and they are calling it “humane”. Matt Johnson is one of the investigators who helped release the footage. He has just been arrested and is facing 5 years in jail for exposing this.

Matt Johnson exposed Iowa State Farms and the farm should be charged for inhumanely killing thousands of pigs through the VSD method which caused them to die slowly over several hours. Instead of prosecuting Matt (who is nonviolent and has not killed any animals), Iowa State Farms should be prosecuted.