Who are Smithfield? (from BBC) 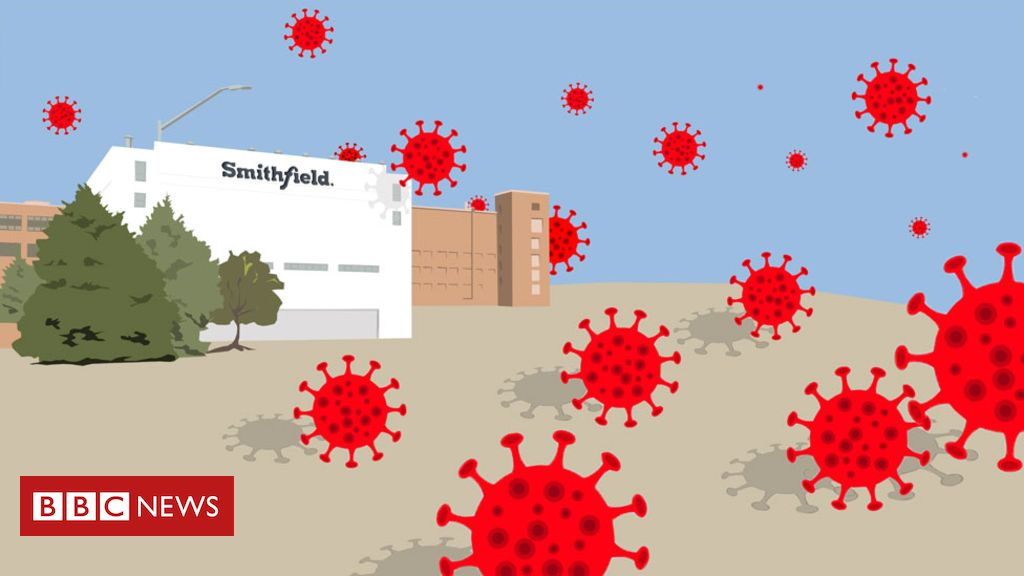 Infections spread like wildfire through a pork factory in South Dakota. Here's how it happened.

How did the biggest cluster in the US emerge in a corner of South Dakota? Infections spread like wildfire through a pork factory and questions remain about what the company did to protect staff.

On the afternoon of 25 March, Julia sat down at her laptop and logged into a phony Facebook account. She’d opened it in middle school, to surreptitiously monitor boys she had crushes on. But now, many years later, it was about to serve a much more serious purpose.

“Can you please look into Smithfield,” she typed in a message to an account called Argus911, the Facebook-based tip line for the local newspaper, the Argus Leader. “They do have a positive [Covid-19] case and are planning to stay open.” By “Smithfield”, she was referring to the Smithfield Foods pork-processing plant located in her town of Sioux Falls, South Dakota. The factory - a massive, eight-story white box perched on the banks of the Big Sioux River - is the ninth-largest hog-processing facility in the US. When running at full capacity, it processes 19,500 freshly-slaughtered hogs per day, slicing, grinding and smoking them into millions of pounds of bacon, hot dogs and spiral-cut hams. With 3,700 workers, it is also the fourth-largest employer in the city.

“Thank you for the tip,” the Argus911 account responded. “What job did the worker who tested positive have?”

“We are not exactly sure,” Julia wrote back.

The next day, at 7:35am, the Argus Leader published the story on its website: “Smithfield Foods employee tests positive for coronavirus”. The reporter confirmed through a company spokeswoman that, indeed, an employee had tested positive, was in a 14-day quarantine, and that his or her work area and other common spaces had been “thoroughly sanitised”. But the plant, deemed part of a “critical infrastructure industry” by the Trump administration, would remain fully operational.

“Food is an essential part of all our lives, and our more than 40,000 US team members, thousands of American family farmers and our many other supply chain partners are a crucial part of our nation’s response to Covid-19,” Smithfield CEO Kenneth Sullivan said in an online video statement released 19 March to explain the decision to keep factories open. “We are taking the utmost precautions to ensure the health and well-being of our employees and consumers.”

But Julia was alarmed.

“There had been rumours there were cases even before that,” she recalled. “I heard about people getting hospitalised from Smithfield specifically. They only know from word of mouth.”

Julia does not work at the factory. She is a graduate student in her 20s, stuck back at home after her university shut in response to the Covid-19 pandemic. Her parents, two long-time Smithfield employees with whom she is especially close, told her what was happening at the factory that day. She is just one of several adult children of factory workers - many the first-generation children of immigrants, some calling themselves Children of Smithfield - who have taken it upon themselves to speak out about the outbreak.

“My parents don’t know English. They can’t advocate for themselves,” said Julia. “Someone has to talk for them.”

Her family, like many others in Sioux Falls, did everything they could to avoid falling ill. Julia’s parents used up all their remaining vacation time to stay home. After work, they took off their shoes outside and headed straight into the shower. Julia bought them cloth headbands at Walmart to pull over their mouths and noses while on the line.

For Julia, alerting the media was just the next logical step in trying to keep them all healthy, by creating public pressure to close the plant down and keep her parents home. Instead, it marked the beginning of nearly three anxiety-filled weeks during which her mother and father continued to report to a factory they knew could be contaminated, to jobs they could not afford to lose. They stood side-by-side less than a foot away from their colleagues on production lines, they passed in and out of crowded locker rooms, walkways and cafeterias.

During that time, the number of confirmed cases among Smithfield employees slowly mounted, from 80 to 190 to 238.

By 15 April, when Smithfield finally closed under pressure from the South Dakota governor’s office, the plant had become the number one hotspot in the US, with a cluster of 644 confirmed cases among Smithfield employees and people who contracted it from them. In total, Smithfield-related infections account for 55% of the caseload in the state, which is far outpacing its far more populous Midwestern neighbour states in cases per capita. According to the New York Times, the Smithfield Foods case numbers have surpassed the USS Theodore Roosevelt naval ship and the Cook County Jail in Chicago, Illinois.

Those figures were released one day after the first Smithfield employee died in hospital.

“He got that virus there. He was very healthy before,” his wife, Angelita, told the BBC in Spanish. “My husband will not be the only one to die.”

The Smithfield pork plant, located in a Republican-led state that is one of five in the US that has not issued any kind of shelter-in-place order, has become a microcosm illustrating the socioeconomic disparities laid bare by the global pandemic. While many white-collar workers around the country are sheltering in place and working from home, food industry workers like the employees at Smithfield are deemed “essential” and must remain on the front lines. 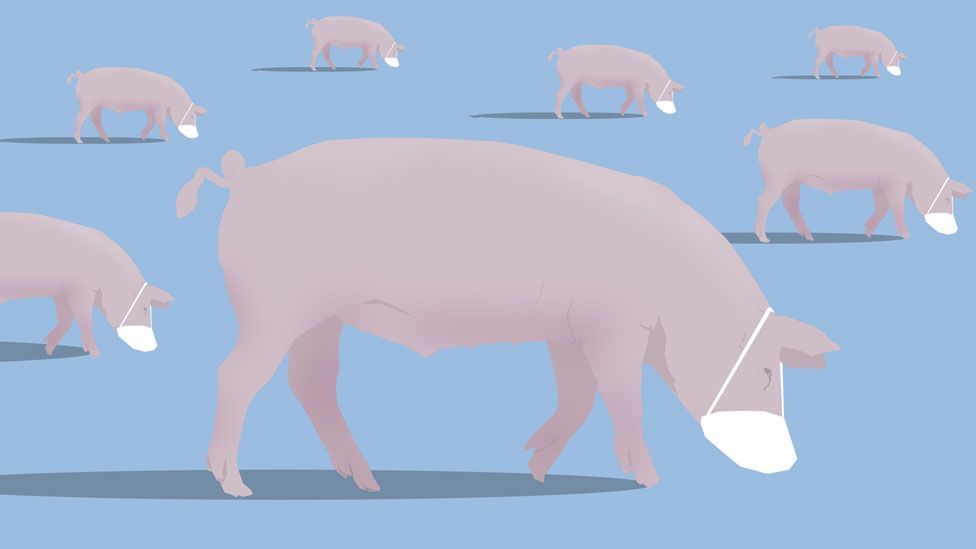 “These jobs for essential workers are lower paying than the average job across America, in some cases by significant margins. So home health aides, cashiers - absolutely essential, on the front lines, have to physically report to work,” said Adie Tomer, a fellow at the Brookings Institute. “They are more predominantly African American or Hispanic than the overall working populations.”

The workforce at Smithfield is made up largely of immigrants and refugees from places like Myanmar, Ethiopia, Nepal, Congo and El Salvador. There are 80 different languages spoken in the plant. Estimates of the mean hourly wage range from $14-16 an hour. Those hours are long, the work is gruelling, and standing on a production line often means being less than a foot away from your co-workers on either side.

The BBC spoke to half a dozen current and former Smithfield employees who say that while they were afraid to continue going to work, deciding between employment and their health has been an impossible choice.

“I have a lot of bills. My baby’s coming soon - I have to work,” said one 25-year-old employee whose wife is eight months pregnant. “If I get a positive, I’m really worried I can’t save my wife.”

Food processing plants throughout the country are experiencing coronavirus outbreaks which have the potential to disrupt the country’s food supply chain. A JBS meatpacking plant in Colorado has shut after five deaths and 103 infections among its employees. Two workers at a Tyson Foods plant in Iowa also died, while 148 others were sickened.

The closure of a large meat processing facility like the one in Sioux Falls causes massive upstream disruption, stranding farmers without a place to sell their livestock. About 550 independent farms send their pigs to the Sioux Falls plant. 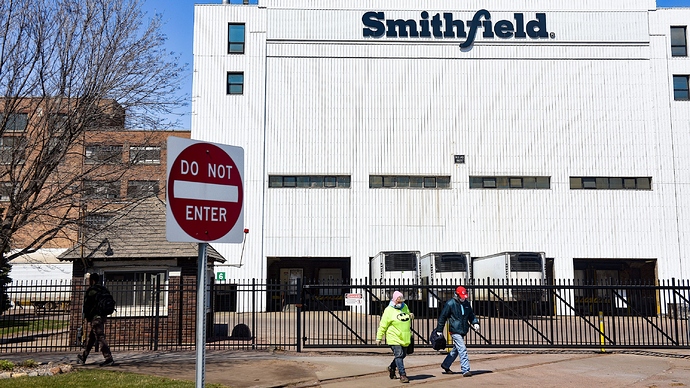 As many as 1,200 workers still not back at Smithfield after COVID-19 outbreak

Motley said that Smithfield would also continue to pay workers who were either quarantined or had the disease while they stay home until July 31.

Smithfield sued for falsely advertising themselves as ‘safest’ U.S. pork...

By Marissa Plescia, Midwest Center for Investigative Reporting A consumer group is suing one the largest pork producers over allegations that the company

A consumer group is suing one the largest pork producers over allegations that the company falsely advertises its products as the “safest” in the U.S.

The Organic Consumers Association (OCA) filed a civil suit May 20 against Smithfield Foods, Inc., claiming they use practices that contribute to the creation of widespread diseases. The group is seeking to stop its ‘false’ advertising and marketing.

Some of the practices include crowded conditions in their plants, the use of potentially carcinogenic drugs and rapid slaughter methods, according to a recent press release. These practices can lead to diseases that can be transmitted from animals to humans, OCA explained in the release.

In a May 26 statement, Smithfield denied those allegations.

“The Organic Consumers Association’s complaint against Smithfield Foods is totally without merit and the company intends to vigorously defend this lawsuit,” wrote Lisa Martin, director of corporate communications.

Smithfield Foods, Inc. is based out of Smithfield, Virginia, and is the world’s largest pork producer. Some of their brand names include Eckrich, Nathan’s Famous and Farmland.

This lawsuit follows a recent report by the Animal Welfare Institute stating that over a three-year span, Smithfield Foods and JBS USA had the “worst animal welfare records among livestock slaughter plants.”

The report said that the Smithfield plant in Sioux Falls, South Dakota, had the largest number of animal welfare violations for a single plant.

According to the complaint filed by OCA, Smithfield uses social media and YouTube to promote their message of safe food production and targets an audience that’s particularly concerned with food safety.

OCA’s complaint also stated that the U.S. Department of Agriculture (USDA) has notified Smithfield on numerous occasions that their pork is more likely to be contaminated with salmonella than other similar products from slaughter plants of the same size.

“Failure to report these notifications to consumers is one thing. But claiming that its products are the ‘safest’ possible pork products in the U.S. is a blatant misrepresentation of the brand’s actual safety record,” OCA Co-founder and Director Ronnie Cummins said in the release. “The current heightened consumer concern about safety in the meat industry is all the more reason to hold Smithfield accountable for false safety claims.”

The USDA found that Smithfield’s pork products contain pathogens often associated with human illnesses resistant to antibiotics, the release said. According to OCA, this is due to Smithfield’s use of antibiotics on healthy animals to prevent the spread of diseases that come from their plants’ allegedly crowded and unsanitary conditions.

This practice is cited by the Centers for Disease Control and the World Health Organization as one of the greatest health risks today because it can lead to the emergence of antibiotic-resistant diseases.

WHO stated on their website that these antibiotics should only be given to animals under veterinary supervision and that they should not be used to prevent diseases in healthy animals.

The release also stated that several of the disease strains found in Smithfield food products are resistant to antibiotics specifically deemed by the FDA as “highly important” or “critically important” for human health.

OCA further explained in their complaint that it was discovered in a 2018 undercover investigation that Smithfield doses its pigs with carbadox, a drug banned in the E.U. because of its potentially carcinogenic effects on humans. The FDA has also moved to ban the drug.

In addition to carbadox, OCA alleges that Smithfield uses a feed additive called ractopamine, which has negative effects on human kidney cells and the cardiovascular system. It has been banned by 122 countries, including China, Russia and the EU, the complaint said.

Martin wrote in the statement that Smithfield follows the rules stated in their Animal Care Management System and Antibiotic Use Policy.

“Consumers put their trust in Smithfield Foods every time they eat one of our products,” Martin wrote. “That’s why the safety and quality of our foods is fundamental to our success as a company. We also honor our commitment to consumers through strictly controlled use of antibiotics and care for our animals.”

OCA stated in its complaint that it seeks no monetary damages, only the end to Smithfield’s alleged false advertising and marketing.