The pig farming industry argues for the continued use of gestation and farrowing crates, stating these methods support higher standards of health and efficiency. This statement misses the mark by a country mile. First off, the animal agriculture industry itself is anything but efficient by design. Secondly, denying pigs their natural behavior and environment can never be deemed healthy under any circumstance.

In the United States, the majority of commercial pigs are forced to live their entire lives indoors in overcrowded Concentrated Animal Feeding Operations: what the industry calls “Intensive Farming.” The well-known term Factory Farm is a more fitting description; animals are treated as inanimate commodities. 120 Million pigs are slaughtered annually in the United States. Female pigs designated for breeding (“sows”) are confined to small gestation and farrowing crates on 60% to 70% of pig farms. The remaining facilities house “sows” in crowded pens within warehouses, and their entire lives are spent indoors. Less than 1.7% of pigs are raised in settings that are not considered factory farms.

Pig farming is a never-ending cycle of confinement and slaughter. The life of an innocent “sow” is so fraught with suffering and confinement, that you would not wish this cruel existence on your worst enemy. “Sows,” unlike “Market Pigs,” are impregnated twice a year and give birth to 5 or 6 litters during their lives in the farming industry. They nurse their litter of 10 to 12 piglets for 2 to 4 weeks (a natural nursing period is 12 weeks), only to be forcibly impregnated again less than one week later. Numerous pregnancies tax their bodies. As soon as they begin producing smaller litters the industry profits further by sending their exhausted bodies to slaughter to be sold as “pork.” 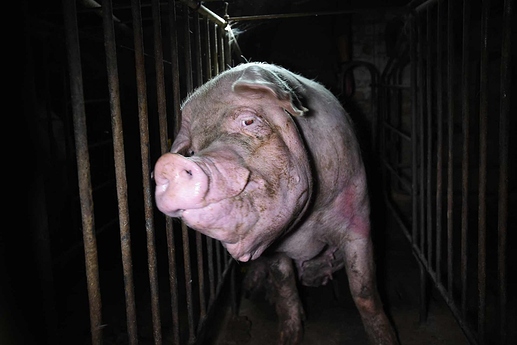 Gestation crates are 6.6ft x 2ft steel enclosures used to house one “sow” during her 4-month pregnancy. These crates are constructed in tight rows. Often, one warehouse facility can contain hundreds of gestation crates. A pregnant pig can merely stand up or lie down, but cannot move nor turn around because the crate is only slightly larger than her body. Although gestation crates are banned in 9 US states, the European Union, and New Zealand, they are still standard practice in the industry. One week prior to giving birth she is transferred to an equally confining farrowing crate where she will nurse her piglets. A “sow” spends ¾ of her short life in gestation and farrowing crates, and a quarter of her life in a crowded indoor pen.

Pigs are denied their instinctual behaviors in gestation and farrowing crates. This lack of innate natural behavior has detrimental health consequences. Pigs and “sows” have complex social structures and travel in close-knit groups of two to four female pigs and their young. They communicate with each other through vocalization, body language, and use these behaviors to establish hierarchies.

But the pig farming industry pushes a narrative of their own. They claim gestation crates are essential to keep “sows” from sustaining injuries due to aggression. What they don’t tell the public: pigs do not belong in indoor pens, and will always show aggression towards each other due to stress and the inability to establish hierarchy with natural behavior. With a level of intelligence that rivals a three-year old human, pigs are cognitively complex and can remember objects. It’s no wonder they repeatedly bite and gnaw at the steel bars of their gestation crates: they can perceive time.

The most common false narrative heard time and time again from the pig farming industry: “sows” will crush their piglets if they are not confined to farrowing crates. Nature, by definition, is intelligent. A female pig’s instinct tells her when it is time to leave the group and build a nest for birthing. She builds a nest by rooting a hole in the ground and lining it with branches and leaves.

However, farrowing crates are not lined with branches and leaves. The floor of a factory farm is far from efficient because it consists of hard concrete or plastic slats that are covered in feces. The slats are designed with spaces for feces collection. Yet feces continue to collect on upper surfaces, breeding pathogens which cause illness among the pigs despite antibiotic overuse. Urinary tract infections and constipation are extremely common among “sows” in gestation crates because they hold their urine and feces. Just like humans, they do not want to eat, drink, and defecate in the same location. Just like humans, pigs develop pressure sores and bone density loss due to the inability to move.

The industry does not confine pigs to gestation crates because it is “healthy and efficient,” they do so for profit. The origin of their self-coined term: “Intensive Farming” is clear: the more pigs per square foot, the greater the profit. The use of gestation crates is a direct result of overcrowding. A warehouse will contain so many pigs that crates are used to cut labor costs: this allows for automated feeding and easier handling.

They call this “efficiency.” Is it efficient to crowd hundreds of animals into one warehouse? Definitely not. Overcrowded facilities are breeding grounds for contagious pathogens, many of which can spread to humans via mutation. Billions of taxpayer dollars pour into infectious disease research and safety programs. The farms themselves spend on vaccines and antibiotics. Rather than abolishing cruelty and investing in plant-based farming, we invest in genome mapping, attempt to breed the most disease-resistant pigs, and allow overcrowding to continue. Factory farms choose confinement because they want control over a natural process and this never ends well.

Regardless of farming methods, pig farming is inherently cruel. To deny natural behavior is inhumane whether pigs are raised in crates, pens, or even sunny pastures. Natural behavior includes the will to live, and the opportunity to grow old, which all commercial pigs will never have.