Depopulation during COVID, from Journal of AVMA

Reduced demand for meat resulting from the closure of restaurants, hotels, and schools combined with shuttering of slaughter and meat processing plants following outbreaks of COVID-19 in employees have caused disruptions throughout the national food supply chain. Companies destroyed thousands of swine and poultry in April as one meat producer warned that millions more animals could be depopulated.

As animal agriculture producers struggled to find buyers for their animals, they had to choose between figuring out how to cover the costs of feeding and finding alternate housing for excess animals or killing those animals, regardless of whether they could sell the carcasses to renderers or would simply have to dispose of them. 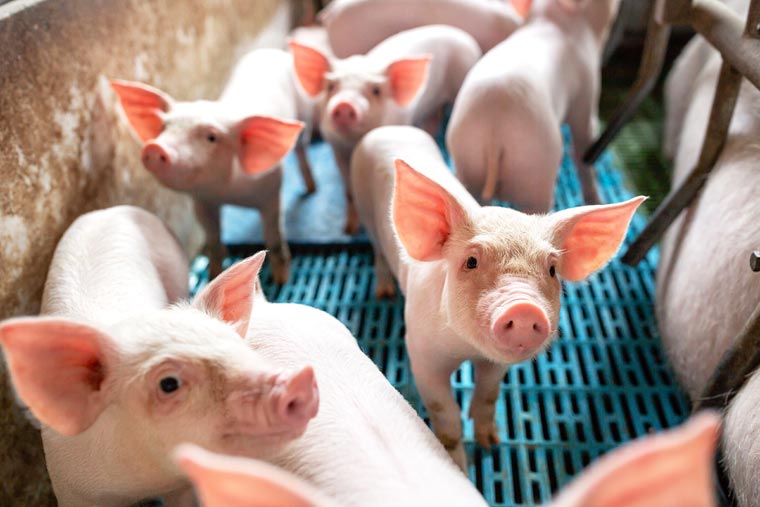 By late April, meat-producing companies with infections and absences among workers responded by halting production at plants that usually process thousands of animals daily. On April 28, President Donald Trump signed an executive order, under the Defense Production Act, establishing those businesses as essential and directing the Department of Agriculture to ensure they stay open, under conditions consistent with federal human health protection guidelines.

By May 8, at least 30 slaughter and processing plants had closed at some point because of COVID-19 outbreaks, affecting 45,000 workers and reducing pork slaughter capacity 40% and beef slaughter capacity 25%, according to the United Food and Commercial Workers International Union. The union, which represents meatpackers and retail workers, reported at least 30 plant workers had died and more than 5,000 meatpacking workers and 1,500 food processing workers had been sickened by the COVID-19 virus.

“Simply put, we cannot have a secure food supply without the safety of these workers,” said Marc Perrone, union president, in an announcement.

An article published May 1 through the Centers for Disease Control and Prevention Morbidity and Mortality Weekly Report backs those figures, finding 20 human deaths and 4,900 human infections occurred at 115 meat processing facilities in 19 states. About 3% of workers at those plants had confirmed infections.

The federal inspectors working in those plants also were at risk.

As of May 5, 197 field employees for the USDA Food Safety and Inspection Service were absent due to a COVID-19 diagnosis. Another 120 were under self-quarantine for exposure to COVID-19, according to a USDA spokesperson.

At least three inspectors infected with COVID-19 have died: one each in Illinois, Mississippi, and New York, according to Tim Kauffman, spokesman for the American Federation of Government Employees.

The FSIS is letting field employees take excused absences from inspection duties on the basis of their work assignments, medical histories, and federal safety guidelines, the agency spokesperson said. The agency had enough masks and face coverings to supply inspection personnel for a few months.

Politico reported April 22 the agency then lacked sufficient personal protective equipment, and FSIS guidance confirmed that the agency had offered reimbursement to employees who bought their own face coverings.

The slaughter plant closures—as well as slowdowns among plants that remained open—caused backups on farms with nowhere to send animals.

Dr. Beth S. Thompson, Minnesota’s state veterinarian, said April 30 workers at a JBS plant in Worthington were approaching euthanasia of 3,000 hogs daily and working to increase to 13,000 daily. The plant usually slaughters 20,000 hogs daily but closed April 20, operating with a limited staff to euthanize hogs for farmers, who would be responsible for carcass disposal. The kill portion of the plant reopened on May 6, in response to President Trump’s executive order, to continue to offer pork producers a euthanasia option for hogs they’ve been unable to process as plants have ceased operations.

The plant implemented new safety precautions, including limiting contact between employees, providing face masks, and performing more disinfecting throughout the building, a UFCW local representative said in a letter to members.

As of May 3, 490 JBS workers at the Worthington plant had tested positive for the COVID-19 virus, according to the Minnesota Department of Health.

The Smithfield pork plant in Sioux Falls, South Dakota, reopened partially on May 4 after closing on April 12. The plant saw an outbreak of COVID-19 that infected 853 of its 3,100 workers, according to local news reports.

A team from the Centers for Disease Control and Prevention visited April 16 and 17 and made recommendations to reduce crowding, especially in the break rooms, locker rooms, and cafeterias; increase the use of PPE, particularly face masks; provide more flexible sick leave policies; increase access to hand-washing and hand-sanitizing stations; and begin screening everyone entering the plant for COVID-19.

In a letter to governors, Agriculture Secretary Sonny Perdue said the USDA directed meat producers to submit plans for reopening closed plants. In another letter, 36 Senate Democrats expressed concerns about the risks of COVID-19 to the people who produce food and questioned how the administration planned to protect those people, including USDA inspectors.

On May 8, USDA officials announced 14 slaughter facilities committed to resume operations within a week, seven of them owned by Tyson.

Producers run out of options

Data published May 9 by the USDA Agricultural Marketing Service indicated cattle slaughter that week was down 32% from a year earlier, and swine slaughter declined 24%.

John H. Tyson, chair of the board of directors for Tyson Foods, warned that the food supply chain was breaking, and millions of chickens, pigs, and cattle could be depopulated rather than slaughtered. He delivered that message in full-page advertisements published in The New York Times, The Washington Post, and the Arkansas Democrat-Gazette.

“As pork, beef and chicken plants are being forced to close, even for short periods of time, millions of pounds of meat will disappear from the supply chain,” he wrote. “As a result, there will be limited supply of our products available in grocery stores until we are able to reopen our facilities that are currently closed.”

In early May, The Washington Post reported that Tyson said in an investor call that the company thought U.S. hog-processing capacity had declined by half.

The company announced in April indefinite closures of a pork plant in Waterloo, Iowa, because too many workers had been absent as a result of the coronavirus pandemic, and a beef and pork plant in Logansport, Indiana. At the same time, the company announced that production had resumed at its Columbus Junction, Iowa, plant, which had been idle for two weeks. Other plants ran at reduced production because of low staffing or pending plans to add more worker protections.

The Associated Press reported 180 infections were linked to the Waterloo plant and hundreds of workers stayed home out of fear. The plant processed up to 19,500 hogs per day, about 4% of the U.S. pork-processing capacity.

USDA Animal and Plant Health Inspection Service officials announced in April the establishment of a National Incident Coordination Center to coordinate help for food animal producers unable to move their animals to market, including finding alternative slaughter sites or providing for depopulation.

“APHIS will be mobilizing and deploying assets of the National Veterinary Stockpile as needed and will also be securing the services of contractors that can supply additional equipment, personnel, and services,” the announcement stated.

The American Association of Swine Veterinarians published a depopulation guide, based on the AVMA Guidelines for the Depopulation of Animals, in case producers run out of other options.

Dr. Abbey Canon, director of public health and communications for the AASV, said swine barns are designed to house certain numbers of animals in each production phase.

“The inability to move pigs through the market channel can create a backlog in the pig flow,” she said. “Additionally, pigs may outgrow their housing environment if required to stay on farm longer than usual, resulting in overcrowding for space, water, and food resources.”

Dr. Thompson, Minnesota’s state veterinarian, said her office was working with federal agencies to secure financial aid for farmers who were depopulating or euthanizing animals as the state lacked money to cover the costs of depopulation and disposal. Representatives from her office also were talking with farmers, producers, and veterinarians about plans they should make—including plans for depopulation and euthanasia.

“I realize that it does seem like everything is falling apart at this point in time,” she said. “But this is really a key time for farmers and producers to have that good conversation with their veterinarian.”

Representatives of the American Association of Avian Pathologists said a few poultry producers had depopulated birds for lack of an available processing facility—and only as a last resort. Companies were adjusting to shifts in demand, increasing time between growing flocks on farms, and preparing to reduce how many birds they raised.

Dr. Eric Jensen, AAAP president, said the number of COVID-19 cases in poultry slaughter plants had been low overall, but some plants were exceptions. He saw little danger of major shortages of poultry or eggs, although he noted that the changing effects of the pandemic made predictions difficult.

Dr. Lisa Becton, director of swine health for the National Pork Board, said the board’s veterinary staff worked with producers to help them maintain animal welfare, find alternate ways to house swine, and find alternate markets for their swine, as well as access information on the best methods of depopulation.

“We know that these plant closures and the plant slowdowns have led to a backlog of hogs in our system,” Dr. Becton said. “And so what our goal is at the pork board is to work with our producers, providing them with resources, links, and information that they can use to make the best decisions for their individual operations and try to get through this most-challenging time.”

Dr. Calvin W. Booker, president of the American Association of Bovine Practitioners and managing partner of Feedlot Health Management Services, works with feedlots across North America. He said some slaughter plants that remained open had reduced line speeds—he estimated about 20%—to add distance and partitions between employees who previously worked in close proximity.

Because so many plants are slowed or stopped, those reductions cause cascading delays on farms, pushing back cattle deliveries days or weeks, he said. Even in the absence of a pandemic, slaughter plants have limited excess capacity, he said.

“Those animals still eat feed every day, and so they continue to accumulate costs,” Dr. Booker said.

Some cattle producers started working to slow down how quickly cattle put on weight or to maintain them at slaughter weight, Dr. Booker said.

“We’re at a time of year where these cows are out on pasture, and there’s probably lots of grass or about to be lots of grass,” Dr. Booker said. “So, we can back them up in the pasture system, and it’s not the end of the world.”

A USDA Economic Research Service report from April 15 indicates producers may maintain their cattle on grass and later send them to feedlots at heavier weights. But that report also describes disorder in the dairy markets just as the dairy industry entered peak production.

Dr. Booker said dairies were dealing with the added costs of being unable to cull unproductive cows and mismatches between how dairy goods are produced for restaurants versus retailers. A company that sells drums of sour cream for industrial or food service use, for example, had no way to package smaller portions for grocery stores, he said.

Instead, the ERS reported, companies discarded loads of unprocessed milk, sometimes spreading it on fields as fertilizer, adding it to manure lagoons, or feeding it to animals.

The USDA announced May 4 that it would spend $470 million to buy more surplus food amid the widespread disruption to the food supply as a result of the coronavirus. The purchases will target fruits and vegetables, meat, dairy, and seafood.

Veterinarians were working at dairies to maintain the welfare of cattle designated for culling, Dr. Booker said. As clients’ finances become stressed, he said, veterinarians need to ensure animals remain healthy and free of suffering.

He also cautioned that veterinarians and farmers are in professions with high risks of mental health disorders. He said veterinarians should be aware of those risks and the potential need to help themselves and others.